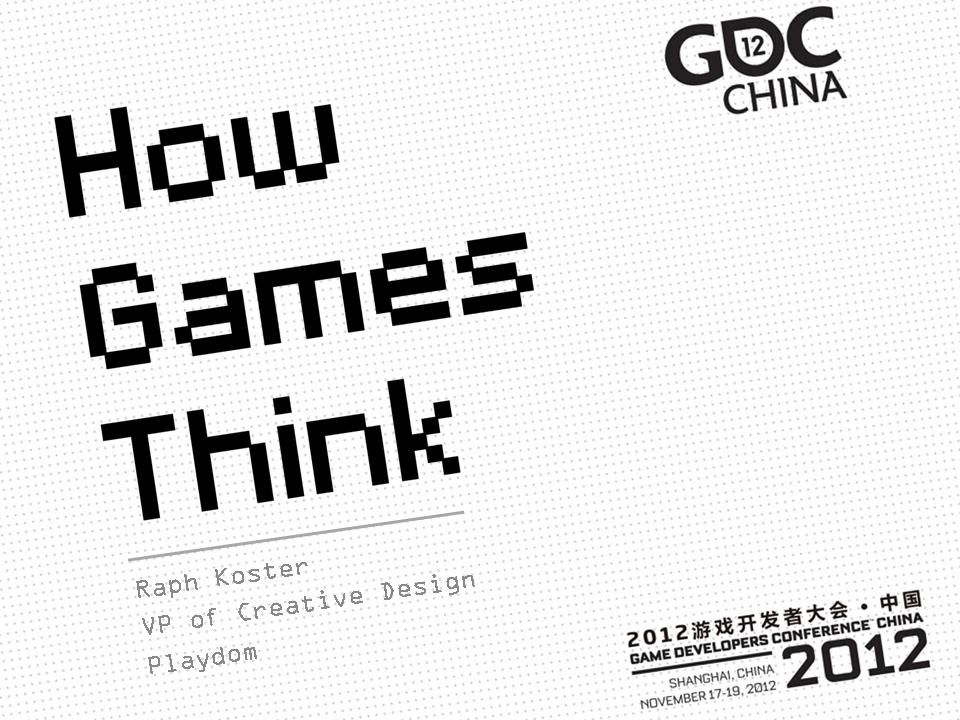 I have finally gotten around to posting up the slides and the notes for my talk delivered in Shanghai just before Thanksgiving.

The notes are actually pretty representative of the actual speech as delivered — we had real-time translation going on, so I kept the pace very deliberate and avoided my usual rattle-stuff-off-a-mile-a-minute sort of delivery. If you go to this link you can see the slides as individual images with the notes interspersed.

If that isn’t to your taste, and you want just the slides, you can find a PDF of the slides here instead.

Afterwards, one of the Chinese attendees came up to me and told me it had been “a faith-building talk.” I can only presume that the folks working in the industry in China have the same crises of faith that we do here in the West. 🙂

There was some coverage in Chinese, I am sure, given that there were reporters there from a few sites. But the only article I’ve found from China is this one. However, Gamasutra was there, and wrote up an article.

END_OF_DOCUMENT_TOKEN_TO_BE_REPLACED

I’ve been sadly neglectful of this blog! In the last few weeks, particularly, because I have been fighting off some sort of nasty flu thing… still have a lingering cough, in fact, and it’s been more than two weeks!

So that meant that while I was flat out in bed, I missed the official announcement about the talk I am giving at GDC China this weekend. It’s been years since I was in Shanghai, so I am looking forward to this!

As far as what the talk is about… well, it’s sort of an extension of the lines of thought from the Project Horseshoe talk Influences and the GDC Online talk It’s All Games Now, and even a little bit from the Theory of Fun 10 Years Later talk. Basically, it’s about the patterns of thinking that games tend to encourage… and how these ways of thinking may be affecting us culturally. After all, if games do their work in large part via neuroplasticity, then that means that the cognitive habits we are picking up as gamers must be having an impact on how we think about, well, everything.

It’s a keynote, and supposed to be “inspirational,” so it’s in a lot of ways a rather light treatment of the subject… but I think there’s a lot to dig into there, and not all of it is unalloyed good… instead, it will be a picture of trade-offs. For example, just recently I read an article on how the neural pathways for empathy and the neural pathways of logical thinking seem to be mutually exclusive; you can’t do both at the same time. You have to emotionally detach yourself to be able to do true systems analysis, but if you are conditioned to approach the world analytically, does this mean that you are conditioned to avoid empathy? Pure speculation, and of course the answer will not be clear-cut.

Anyway, here’s the details on the talk:

END_OF_DOCUMENT_TOKEN_TO_BE_REPLACED

On Saturday I met with the Omaha Game Developers Association in a Google Hangout for a couple of hours of interview-style questions. The whole thing was streamed live on YouTube and also captured afterwards, so here it is for those who have the patience.

Among the things we talked about:

And way more… vid after the break.

END_OF_DOCUMENT_TOKEN_TO_BE_REPLACED

This is post #2,342 on this blog (not counting the dozens of articles, snippets, and presentations not in the blog database)… yet more of the over a quarter-million words written here since the site started in 1997 and the blog in 1998. And I have to admit, I tend to take for granted the idea that people have read all the stuff that matters, so they understand me when I throw around terms or assume that they know what my past writing on the topic is. Which is ludicrous, of course.

So I got asked on Twitter for a list of my juiciest game design posts, to serve as a central jumping-off point.

This was hard. But here’s a list of ones that I think are my best. Many of these are actually talks, rather than posts. These are usually in sort of rough reverse chronological order, but there’s plenty of places where they are just in the order I found them in, or random cut & paste order.

Feel free to list your own favorites in the comments. And if you haven’t seen some of these before, well, this is the best way to catch up on my overall beliefs and philosophies on games.

Theory of fun (cognition and games) and game grammar overview. This covers the very highest level structure of the thinking on these two interrelated subjects.

END_OF_DOCUMENT_TOKEN_TO_BE_REPLACED

Here’s the PPTX, which includes the speaker notes, which this time are extensive: Koster_Raph_GDC2012.pptx

And the closest I can get to the speech itself is this page here, which has an image of each slide, followed by the notes… so you can just read it like an article.

I imagine video will be up on the GDCVault eventually…