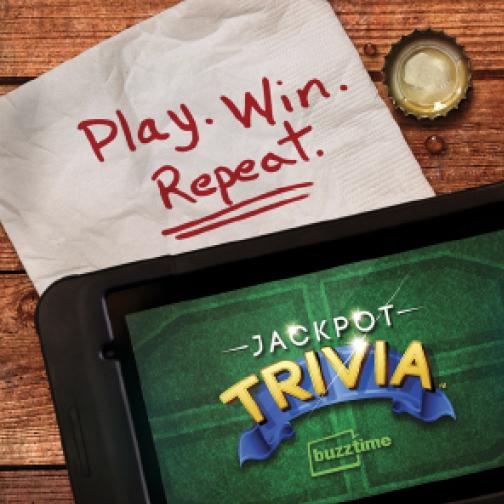 A while back I mentioned a few game announcements coming soon. One was, of course, Crowfall, about which I hope everyone knows at this point. This post is about another one!

A year ago or so I started working with NTN Buzztime as a consultant– these are the folks who provide bar trivia to venues all over the country. You might have seen their stuff if you ever go to a Buffalo Wild Wings restaurant, for example. They have been doing networked bar trivia for decades now.

I worked with them to revise the core trivia experience. The press release about the resultant game, Jackpot Trivia, went out today. The chief goal was to make playing trivia more of a local multiplayer game, and to get more people to feel good about playing when they’re in a world with terrifying trivia experts. And yet, you still want expertise to come out ahead… so it was a fun design problem. Read on for how we tackled it…

The way we approached it was to try to make the game a tighter race in general. The prevailing trivia model, Countdown, uses hints unlocked at specific times on a countdown clock. However, while this helped inexpert trivia players answer slightly faster for a somewhat higher score, it didn’t make the matches competitive. We needed two things: a way for the people who weren’t trivia experts to steer the matches towards areas they knew about, and an alternate “game” within the game, so that someone who was bad at trivia but good at that alternate strategy could leverage that strength (and conversely, someone good at trivia but bad at the alternate game, would suffer some).

We ended up with a game that features a category draft at the start: you allocate votes into a bunch of categories, and can throw all your votes into just one if you like. This lets, for example, a kid toss in a bunch of votes towards say, Pokemon or Disney trivia, to level the playing field against expert geographers or historians. These votes weight the category selection, so there’s still a random factor in there. A set of ten question categories is then drawn and shown to players, but we don’t tell you the order in which they will appear.

This matters because the “alternate game” is that of wagering on which answers are right. Every round, you get 5 tokens to put on different answers. You can split your votes, or spend tokens on hints (which means you’ll get a lower payoff if you are wrong). You also have two very powerful moves: a “gimme” that just gives you full reward for an answer, that you can use on a question that utterly baffles you; and a “double down” which can give you double the points for a correct answer. These effectively serve as forms of handicapping, enabling inexpert players to gain maximum advantage by carefully selecting a strategy on their wagers across the course of the ten questions.

We knew we had the mix right when we were able to run thousands of Monte Carlo simulations with simulated players of various levels of expertise, and get out consistent results: a true know-it-all generally still wins, but good strategy play can outweigh knowledge to some degree, and all races tend to be tight. Most importantly, nobody feels like a loser.

The game is designed for group play, rather than the fairly anonymous “everyone against the world” mode that existed in Countdown. It’s been great to see excitement at tables as people play together. In addition, the fact that there is category voting and the like opens a rich vein of possible metrics and analysis, which can help both the game operators and the venues better understand their customers and over time provide an even more fun night out. The team did an awesome job of implementing a super-appealing player experience, and they’re already plotting ways to improve the game even further as a live experience. 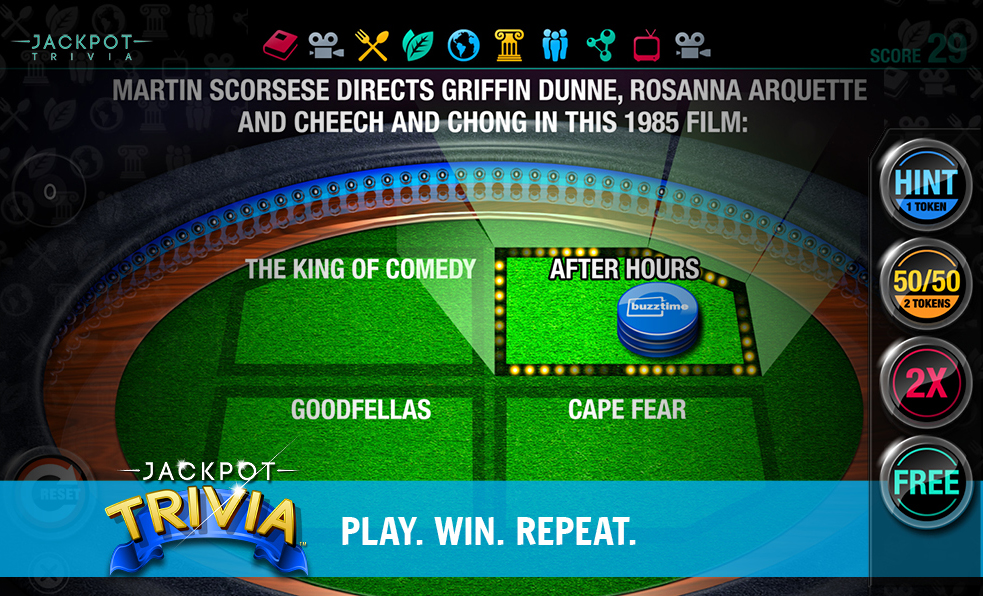 Jackpot Trivia is certainly going to be one of the more unusual design experiences in my career: it’s incredibly thrilling to work in such a different area of massively multiplayer design. I learned a lot about the restaurant and bar industry in the process of doing design on this title. We tend to forget, I think, in the bowels of the hobby, that games touch all sorts of people, in all sorts of ways — even over hot wings.

So — Jackpot Trivia is available now at select locations nationwide, maybe a bar or eatery near you. Hope you find it and get to play it!