Side note, I am struck how little long-form coverage there is of talks anymore, now that so much blogging has moved to Twitter…

A bit more coverage of my talk at GDCOnline: 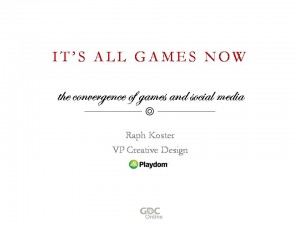 Here are the slides for the talk that I gave today at GDC Online. I have to warn you that more than usual, you needed the performance, I think. So keep an eye out for when the video shows up on the GDCVault — I’ll be sure to let you know. 🙂

It seems to have gone very very well. Lots of positive feedback on Twitter and in the hallways afterwards.

If I had to summarize my message, I suppose I would rattle off this set of bullet points:

But summarizing it that way skips the fairytale I told, and the rapid-fire science-fiction story I told, and my brief Jonathan Coulton musical quote, and much more. 🙂

I ended on this hope from Ted Nelson:

I hope, that in our archives and historical filings of the future, we do not allow the techie traditions of hierarchy and false regularity to be superimposed to the teeming, fantastic disorderlyness of human life.

You can read Gamasutra’s write-up here. I think it captures the essence pretty well!

Gamespot has a writeup, and Damion has posted his slides. I missed the talk, but it sounds like it was a good one!

“The irony of being alone in an MMO is inescapable. Being a loner is OK, but feeling lonely is not.”–Schubert, on why even solo players care about a well-populated world.

Slides are here (in PPTX format). 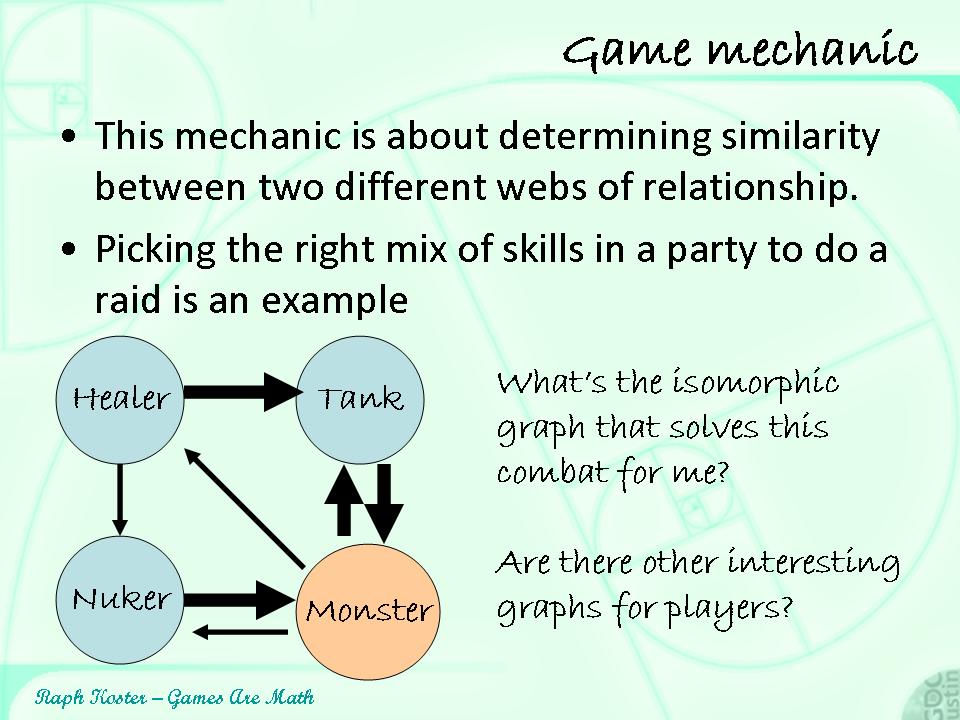 I have posted up the slide deck (PPT) and a page of images of slides for my GDC Austin talk, “Games Are Math: 10 Core Mechanics That Drive Compelling Gameplay.”

This talk starts out with some game grammar stuff that may be familiar, then moves into looking at a definition of NP-complete problems, then provides ten examples of how they can be used to look at games, then finishes by examining cognitive bugs in the brain that many games exploit. Please note, I am not a mathematician nor even claim to be very good at math. 🙂

As usual, this along with all my other talks can be found on the Gaming Presentations page, reached by clicking “Games” on the top bar of the site, then choosing Presentations from the sidebar. For those of you who never click the top bar and think all that is here is the blog — there’s a wealth of stuff available there. 🙂 I’ve recently updated it to include a few presentations that were buried and hard to find, such as the audio for my Games For Change closing address, the videos for Living Game Worlds IV and Siggraph Sandbox, and more.