Turns out there’s an MMO Part 4: End Game Content video that I didn’t know existed. I haven’t watched it yet, but here it is!

I was sent a link to this set of YouTube vids on the history of the MMO genre from MUDs forward. It’s worth a look, even if only to get  a rare glimpse of actual video footage from some of the older games that many folks today don’t even know existed (after all, WoW invented the genre, right?)…

Among the oddities, errors, and omissions:

As a side note, on the graphical MMO explosion — even though a bunch of titles launched in a very staggered way that is covered in the documentary, I think that in practice just about all of them started development around the same time. It’s just that some of them finished faster.

There’s definitely a book to be had about everything in this history… someone (not me) should go write it. 🙂

Vids after the fold:

END_OF_DOCUMENT_TOKEN_TO_BE_REPLACED

Lum has forums again. No, I don’t know what madness has possessed him.

However, there’s a fun thread there asking “what is the real difference between gamey MMOs and worldy MMOs?” There are detailed replies, like geldonyetich’s, which give nice coherent answers. But the fun answers are the one-liners.

Alas, the good one-liners are all on the gamey side. 🙂

Games are fun, worlds are work.

So I started trying to come up with my own one-liner riposte. But mine weren’t funny and sharp. They were stuff like “Worlds are varied, and games get monotonous” or “Worlds offer choice, games don’t.” But these kinda suck.

So I figured I’d invite you readers to solve the problem for me. We need a comeback for Soulflame’s pithy statement. 🙂 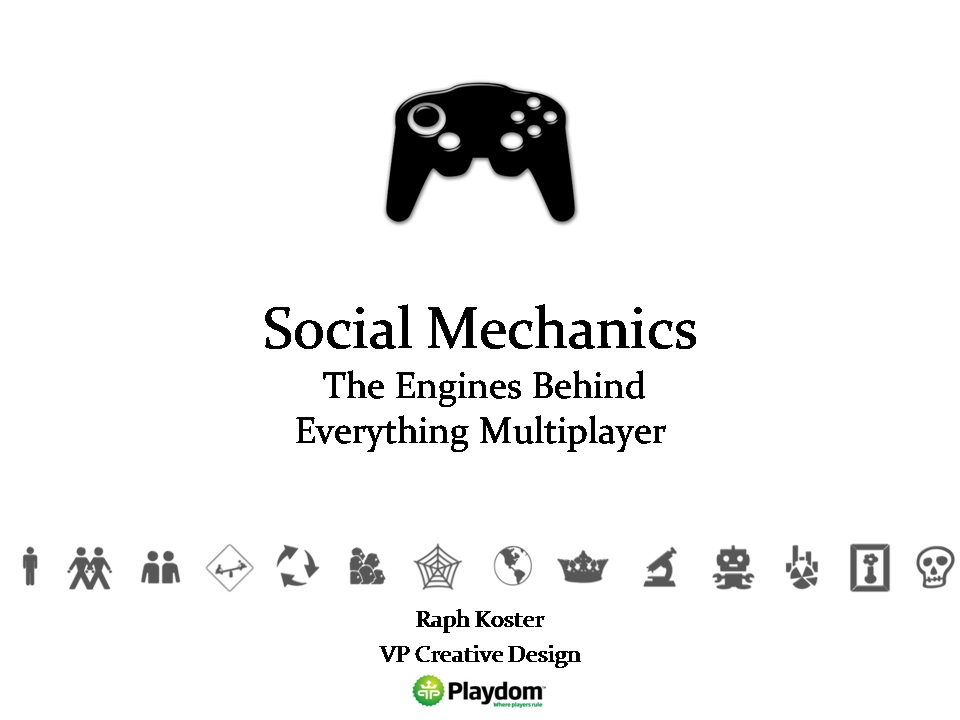 The intent of this talk was to do a “powers of ten” sort of look at multiplayer mechanics… not really to describe anything new, but instead to try to take the whole big spectrum of what we think of as multiplayer game design, and do a cross-disciplinary look at it. I covered a bit of game theory, a bit of psychology, a bit of evolutionary biology, a touch of history, a heavy dose of sociology, a dash of social networking theory, and of course, game design stuff.

My hope was that when done, it would both serve as a good context for thinking about multiplayer games of several sorts, and also as just a plain old reference, something to point at when discussing things like what the impact of gifts and wall posts are in social games, or why some MMOs have longer retention cycles.

So here it is as a PDF, for your perusal. I tried to make the slides stand on their own as much as I could, but of course, the actual voiceover would make many slides more comprehensible. For that, look for the actual session recording to appear on the GDC Vault.

Long-time readers will notice that there are bits here that reference and repeat elements of much older presentations. I recommend following up this one with the math-heavy but extremely related presentation on social network theory Small Worlds: Competitive and Cooperative Structures in Online Worlds (PDF), if you have not seen it before… I gave it back in 2003, a year before Facebook launched. 🙂 It digs a lot deeper specifically into many of the characteristics of large scale-free networks in games.

Gamespot has a writeup, and Damion has posted his slides. I missed the talk, but it sounds like it was a good one!

“The irony of being alone in an MMO is inescapable. Being a loner is OK, but feeling lonely is not.”–Schubert, on why even solo players care about a well-populated world.

Slides are here (in PPTX format).