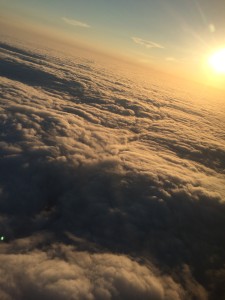 A new platform on which to play games is invented. It might be a new graphics technology (Vector graphics! Color! 3d! VR!). It might be a technical advancement of a different sort (Modems! Servers! Streaming! D-pads! Small screens! Big screens! Touch screens!). It might just be a new marketing channel (Games in bars! Games at home! Games in restaurants! Games in stadiums!).

Its distinguishing characteristic is that it is worse at the old sorts of games than the existing platforms, but better at something new.

It’s still cheap to make something for it, usually, and it’s risky. Big companies stay away, or they try porting over something that has worked before. It doesn’t do great because it’s a mismatch for the new capabilities — and restrictions — of the new platform.

It’s almost inevitably something new in mechanics, with fresh game system design in some fashion. It has to be, you see, to take advantage of what the new platform offers.

Other people quickly start to make more things like that game: they clone it. Quickly, the best executed one of these takes off and founds a genre. It might even be the first one. New inventions are everywhere. Genres are born. People refer to it as a golden age of creativity and innovation in games. Wacky experiments abound that people fondly remember. A whole generation of players grows up thinking this is what games are.

As the platform grows, these early movers can get users very cheaply. The game cost relatively little, and the people with money from the other platforms are fumbling around thinking they know everything.

Because they make lots of money, and they are more worried about little guys than big guys, they start spending more of their cash on production values and on marketing, to freeze out smaller competitors. This manifests as things like buying up ads or users as intentionally high prices that smaller shops cannot afford; pushing higher art costs as they work to extend a technological lead so that smaller groups cannot compete; and buying some smaller guys outright. One of these people eventually makes the game that defines that genre forever. They “win.” And are rewarded with even larger swimming pools of money.

They quickly discover that mechanics innovation doesn’t drive loyalty and is very expensive. Brands and stories, however, are relatively cheap once established, and do drive loyalty. So they divert their spending from innovation towards narrative elements. In particular, they find that characters drive the most, followed by narrative worlds users can imagine themselves in. Soon they discover the idea of the brand extension, where they push these characters into many different (and usually cloned) mechanics and systems in order to extend their reach to new markets.

They also become the new big guys, and quickly succumb to all the same practices that they despised in the previous generation of big guys: exploitative pricing strategies, long crunch hours, aggressive marketing tactics, freezing out competitors using cash, etc. After a while, inertia starts to hold them at the top, simply because they have so much money they can buy their way to staying there. After all, visibility comes with cash, and visibility trumps everything.

Some of the dinosaurs from the older platforms that haven’t run out of money (most did, and died) figure out that the new platform now runs just like the old one, and they join the party.

Pretty soon all the games are heavily narrative brand-building exercises based on the mechanics that were invented in the first few days of the new platform. Genres which cannot sustain the profit margin required to operate the big teams (too small an audience; too expensive to build) are quietly left to die. A whole generation of players grows up thinking that this is what games are.

The two groups of players with radically different pictures of what games are spend a lot of time squabbling on the Internet.

Worn out from working at an increasingly less creative shop, or never having worked at it at all because it seemed like a soulless marketing machine, a group of devs start to develop small things on alternate platforms that the big guys have decided are not worth their time.

One day, one of them hears that a new platform on which to play games has been invented…

23 Responses to “An Industry Lifecycle”