We’re laying out Metaplace Central again. We have iterated it a lot, as we try out different flows, add new tech that makes it more appealing, and so on. These days, what with the balloons, the board games on the table by the cafe, and the many teleporters to user worlds, layout is growing more challenging as we strive to both fit everything in and also make it a social space.

Musing on these problems not only made me dig out my copy of A Pattern Language but also reminded me of how 8 years ago I did a brief examination of the maps of two popular cities in what were then two popular MMOs: Ultima Online and EverQuest. These days, the science of zone layout has improved a lot.

Every sort of videogame map design has its own constraints. For example, if you look at multiplayer shooter maps intended for deathmatch, you find that they are constructed around the notion of intersecting loops. Each loop is set up such that you can run around the loop over and over, trying to catch or avoid an enemy, or make a quick turn to hop onto an intersecting loop, to avoid or ambush. Capture the Flag maps have a requirement for a high amount of tactical symmetry, but also a certain number of vulnerable approaches, so that covering all the possibel entrances is a difficult challenge.

Maps for textual virtual worlds were liberated from the tyranny of geography; the nodal nature of the space meant that a room was of arbitrary size, and yet every room took the same amount of time to traverse. (Some muds had the notion of a “move cost” which allowed some rooms to be “larger” via consuming movement points). You had rooms that were inside televisions and rooms that were hundreds of miles of ocean; the distance between the docks and downtown might be the same as the distance between Europe and Africa, in terms of commands issued.

This may seem miles away from the issues of modern seamless virtual worlds, with 3d perspectives and no zone loading boundaries. But it’s not. There are hugely important topological considerations that seem to always apply to layouts in virtual worlds. And here are some that I have learned, and re-learned, over the years: 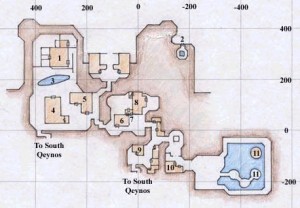 Always make sure users can tell which way to go. Whether you have text, 2d, or 3d views into your world, you need to provide clear cues. If you have height, that’s a great way to do it. Roads, obviously. Barriers, obviously. Starting a newbie at a dead end and giving them only one way to go is a classic way to deal with early confusion. Large landmarks that can be seen from a distance can serve a similar purpose.

Don’t use invisible barriers. Make them natural. Even if they are just trees too dense to realistically walk through, or a slope that is just a tad too steep — when you are shaping your space, use something users can see. I have repeatedly put my foot down and left out the ability to mark specific locations as blocking from the Metaplace platform because attaching blocking to something visible is just better design. A user cannot tell why one stretch of grass has an invisible wall and another does not: to them, emptiness affords walking. 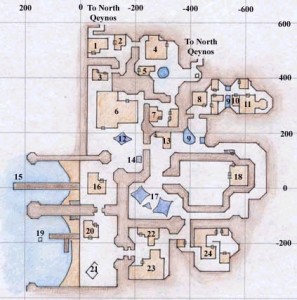 Mazes suck. ‘Nuff said. They are for puzzles, not for places.

You’re making cozy worlds. Each space — be it a hypertextually linked set of rooms, or a 3d zone — should be a self-contained pocket, a thematically connected area with clear boundaries. Probably the best elucidation of this principle came from Damion Schubert (he of Zen of Design), is his talk about applying the design lessons of Vegas casinos to virtual worlds. Even in real-world cities where old townships have blended into one another, we cling to the notion of “placeness.” Look at London; you can tell when you enter and leave the old neighborhoods, because they have characteristic qualities to them. In artificial worlds this can be art sets, lighting, whatever.

Enclose things. A consequence of modularity is enclosure. The real world is enclosed all over the place. We have rooms, we have squares, we have walls, we have valleys, we have treelines bounding properties. Enclosing and marking boundaries is part of what humans do to a space. Among other things, this allows strong thematizing of a given space, maximizing the art resources for it (thereby making it more beautiful or interesting), allows you to strengthen the navigation, and creates a sense of shared identity among users.

Exits matter a lot. You’ve gone and enclosed a space, and paid lots of attention to the interior. Great. A flip side characteristic is that moving from one pocket to another should feel dramatic: a tight passage revealing a wide vista, coming over the crest of a mountain and revealing a valley, discovering a door behind a waterfall, a big bold gate with guards. You want to signal that the user is entering a space with its own framework and rules. There are a lot of visual cues that are used, but most of them carry some sense of “gate” to them, even if it is as simple as a path that winds between two hills: a passage between two tall things. 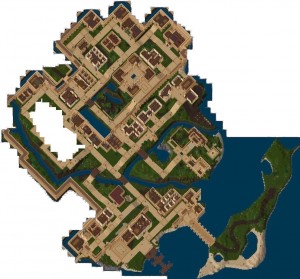 Modularity. A consequence of designing in cozy world pockets is that you can have all sorts of complex layouts within a zone, but the connections to neighboring zones should be relatively few and should be obvious. Take a look at this map from EverQuest: the city proper is highly complex (and very very difficult to navigate) and the exits to the neighboring zone — the other half of the city! — are in twisty alleyways and very hard to find. This was because of 3d culling technology at the time, but it made navigating Qeynos for more complicated than it needed to be. On the flip side, EQ did a great job of modularity and linking zones. When linking zones, you have to try to remember that users will remember the high level map in a highly schematic form. In effect, they will turn the zone connections map into a graph that will look a lot like a text mud map in their heads.

Social spaces point inwards. Take a look at the way you have your central gathering spot planned. The center had better be fairly empty. Oh, put a landmark there, yes. But don’t inadvertently make your central plaza into a ring topology instead of a space. Ideally, the landmark in the middle affords some form of simple social play. Fountains were common in the text muds, and with good reason — there is something deeply culturally ingrained around watering holes. Also, this space must be welcoming; it is the last place to use dingy dark colors. 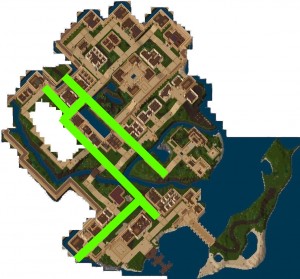 Traffic flows in Trinsic -- look at all that wasted city!

Watch where people want to walk. The city of Trinsic in UO, which I laid out, failed this badly. Look first at the main map; then at the second one, where you can see green paths showing the principal traffic flow through the city. The main entrance on the north side was the principal entrance to the city. But if you stayed on that thoroughfare you ended up in a dead end on an island. You had to slide over by a block to reach the other main exit. What’s more, on the third screenshot you can see where key buildings are located — inns and taverns. See how one of them isn’t on the green paths? Guess which one is always empty.

Adventure spaces point outwards. In general, if you are exploring you want a horizon (or more than one) to head towards. Where social spaces create a sense of security, adventure spaces should create a sense of uncertainty and the unknown to prompt users to keep going.It isn’t about endless vistas; it’s about interest. This is one place where procedural spaces so often fall down. The ways in which you point onwards can be quite subtle. World of Warcraft does it even down at the difficulty level of monsters: the far end of a zone is slightly tougher than the near end. 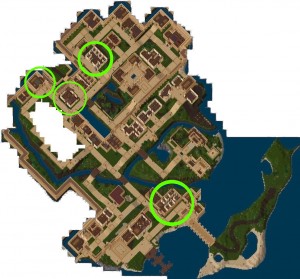 Where the intended social spots were in Trinsic

The defining activity. Every location had better have something characteristically defining about it. Sure, every city has to have the same amernities, and every zone must have monsters. But get creative. This wilderness zone has the pool you can swim in that is perfect for picnics. This other one has the great layout for ranged combat. This inn has the trivia game; that one has the chess board. Users will self-select into the spaces which feel culturally comfortable to them.

All of this is fractal. Within a given space, you are designing spaces. So even in a town center, you want to provide more than one “center”  — a big one and a couple of smaller, enclosed, flavorful, inward-looking spaces. A town center is shaped that way, but so is the inn that is on the plaza. And so is the table arrangement within that inn, so that each table is a pocket. A swing set surrounded by willow trees in a corner of the park, and so on. At the highest level, in UO we had huge areas that were bounded by ocean, forest and mountain — the pass across the mountains was a notorious PK haunt, and a notable “gate.” The eastern side of the mountains had many zones in itself — the areas around Britain, Trinsic, and so on. And even between Britain and Trinsic, there was a chokepoint bridge. And so on, down to the turtles and beyond.

What were the things that we wanted to fix in the latest iteration of Metaplace Central? Well, newbies spawned in the middle of the street. The street had multiple ways to walk — so half the newbies wandered away from the central social spot. There was only one social pocket — and it was on the side, not in the center. The town plaza was mostly impassable. All simple things that using the above guidelines warn against.

Last thing — much of the above applies to websites as much as it does to maps. But I leave that as an exercise for the reader.

11 Responses to “Some zone design lessons”