There’s a great postmortem of the Metaplace game jam we did a couple of weeks back at WorldIV.com » Surprisingly, Making Games is Hard Work. 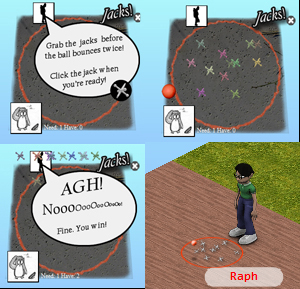 The jacks game I made

I did jacks — I was planning on doing Pente after that. My thoughts on it:

These were designed a little games that you can click on someone else and invite them to play. The screenshots, by the way, are what jacks looked like about an hour after the jam ended, so I got all the way to “alpha” — playable, reasonably balanced, and with a general visual design in place.