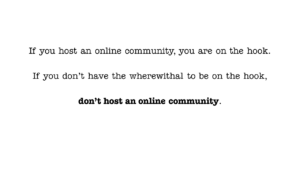 I seem to have touched a bit of a nerve with my talk at GDC! (The page for the talk with slides and video is here). Some of the coverage and links so far:

While the official talk title is “What Social VR and AR Can Learn From MMOs”, it gradually becomes quite clear that anyone working in tech nowadays — or for that matter, anyone interested in the future of real world governance — should watch it too..

Why are new VR/AR developers so slow to learn from past MMO experience?

“I think a lot of them don’t even think to look,” Raph tells me, “or think with the goggles first, like I mentioned in the talk. After all, social media web people didn’t look either.”

It also hit BoingBoing, where Cory Doctorow wrote quite a little essay around it:

Raph describes this year’s speech as “darker” than in previous years, and I don’t know if that’s the right word — more like “angry.” Koster is angry at the proliferation of abusive behavior in online worlds, especially in the new VR and AR worlds, which are recapitulating every stupid mistake made in share online spaces all the way back to text MUDs.

But the designers of Koster’s era had an excuse: they were making mistakes no one had ever made before. The current crop of designers — all the way up to Marc Zuckerberg, who so disgusted Koster during a job interview that Koster publicly says he never expects to work for Facebook again — are making mistakes that have been lavishly documented, and the only explanation for making these mistakes again is either cruelty or depraved indifference to cruelty.

After the talk, I was also asked a bunch of questions by the MIT Technology Review:

Raph Koster, a high-profile video-game designer whose hits include the multiplayer online game Star Wars Galaxies, thinks VR trolling is in fact likely to get worse. He used a keynote at the gaming industry’s giant GDC conference in San Francisco earlier this month to warn that VR companies need to do more than offer victims defensive tools such as space bubbles and mute features. He says companies will have to start more actively curating, investigating, and punishing bad user behavior, for example by hiring dedicated staff.

“If anything, the behavior now is better than it will ever be,” says Koster of the current moment in social VR. He says his experience launching Ultima Online, one of the first virtual environments that could host thousands of people at once, showed that when more people start visiting a virtual space, trolling becomes more of a problem because they feel more anonymous. “When you get strangers bumping up against one another they behave more poorly,” he says. “Peer pressure is one of the things that keeps people behaving well.”

This also led to an article over at Massively Overpowered, where there is a lively discussion in the comments.

So… here to speak for people who’ve played sandbox MMORPGs is veteran MMORPG designer Raph Koster (Ultima Online, Star Wars Galaxies, Crowfall), plainly quoted in the article to point out how adorably innocent and naive the VR devs are about human nature online in virtual worlds.

Koster speaks to the social and ethical implications of “turning the real world into a virtual world” and that MMORPGs have provided a foundation for such through lessons learned over the course of their history.

The hour long presentation explores some of the issues and ethical conundrums that both players and developers face when participating in VR/AR games. His contention is that game designers are in the best position to help others enjoy life.

In addition, it popped up on the usual places like MetaFilter and Hacker News and even in some extensive coverage on 4Gamer.net in Japan, and there were a lot of great comments from Twitter:

(and even if you're NOT working in one of those fields, but use online communities [LIKE TWITTER], it's a fascinating, important talk)

My 2nd "must watch" GDC talk rec (see my TL for last night's): @raphkoster on what AR/VR can learn from MMO's: https://t.co/HlcmiUUbLY

If you're designing or building VR spaces then you need to watch Raph lay down decades of social system know-how: https://t.co/3v5AoMaJ5G

https://t.co/NYzdcKrvUO @raphkoster on the responsibility of building virtual worlds. this is one of the most important talks I've heard.

GDC talk from one of my favorite thinkers, if I could, I would force every social VR/AR designer to watch this on repeat until they got it. https://t.co/dJW9j6pUy3

Wonderful, scary, honest, brutal, hopeful, this talk has it all. This is such a great and important piece for all VR/AR/MR world designers https://t.co/vQiyUlwTdT

Great talk. If you are interested in building virtual worlds, go watch this and be depressed! Stuff we need to think about. https://t.co/a2hg8abCin

Everyone with a computer and/or smart phone should give this talk by @raphkoster a listen #MMORPG #Future #AR #Games #Gaming #Reality #Scary https://t.co/j5qzr3hW5A

Amazing talk. Virtual societies are real societies, and all societies have folkways and mores that are part of the culture. #gaming #MMO https://t.co/FQUa4yCXjT

If you're a developer writing any code that facilitates user interaction or content creation, you owe your future customers this one hour. https://t.co/VAmz0nDb8g

What a fantastic talk by Raph Koster 👏👏👏👏
Building virtual worlds has moral and ethical implications, should have legal ones too. https://t.co/Pss5rWDngZ