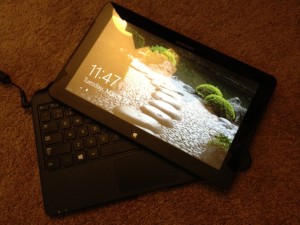 Some background: I have been using Tablet PCs for a decade now. Back in the UO days, I always walked around with a paper notebook full of doodles, and I often sketch out design ideas as diagrams and quickie cartoons. With a pressure sensitive stylus I can also then do artwork directly — concept paintings (the sort of thing you then give to an artist so they can make the real concept painting…!) or game sprites or whatever. These days, I carry my iPad pretty much everywhere, and I can code on it a little bit, I can sketch on it, I doodle with it in Notes Plus, and I even have the Pogo Connect pressure-sensitive stylus, so I can use that for art. But I am working on the colored cartoons for the second edition of Theory of Fun, and none of the iPad art programs will successfully load the Photoshop files I need to work in. And I was in the market for a new laptop anyway, so I went shopping for a Windows 8 tablet.

So this post is what I learned and what I picked. I have another giant post done as well, with everything I had to do to get the new machine set up to my satisfaction. It was info all scattered randomly all over the Internet, so I figured that it might be valuable to gather it all in one place. But this post was long enough already! So look for that one tomorrow.

, after checking out everything that met these requirements:

There is a handy spreadsheet here that dives into excruciating detail on the relative features of the very few machines that meet the criteria. For me, it came down to

I rejected these:  VAIO Duo (no touchpad, expensive, N-Trig), Asus Taichi (N-Trig), Fujitsu T902 (heavy! oldschool!). I ddn’t get to try the others listed in the spreadsheet, but they mostly all had N-Trigs.

I was sure I was buying a Surface Pro. Then I spent three hours trying it out next to the Smart PC Pro. Here’s what I arrived at:

I got the A02 from the Microsoft Store, at retail. That’s because 1) I could get it promptly 2) Microsoft bans bloatware, so all their laptops are blessedly free of crap. Online, odds are good you’ll get the A01 from Amazon

, and it will come with gigs of stuff you don’t want.

There are four models, and three of them are basically the same. Don’t ask why, even Samsung does not seem to know. Ignore the specs on their site, they are riddled with errors. All of them have the same storage, RAM, clock speed, etc. One possible difference is whether they have the Infineon Trusted Platform Module. The A02 from MS does. But word on the Net is they all have it, it’s just turned off in the BIOS by default. I ended up turning it off in my case anyway. In the US, none of them have 3g or LTE. The sim card slot is blocked and there’s nothing behind it.

The A04 is the different one — it is physically larger, and stuff like skins and maybe cases won’t fit it. Also, the keyboard dock is apparently different. So I avoided it.

I have ordered a case — the only one that holds the dock too, the Poetic Flexbook Keyboard Portfolio

. It won’t get here for a while yet, but it was only fifteen bucks, so I figured I’d take a flyer on it. It has an additional stylus loop on the back, so I will probably use on the of Penabled styluses from a previous Tablet PC and leave the small S-Pen in the slot as a spare emergency one. Experiments so far show that using that gives me even better pressure response.

The plasticky doesn’t bug me, honestly. It’s really more the dock than the computer itself that feels that way.

I do hear the fan on occasion, which is disconcerting when holding a tablet.

There have been a lot of reports of the keyboard dock not clicking in or staying connected. I have had no issues with it disconnecting — there was apparently a firmware upgrade not long ago that may have addressed this. I do find it hard to get the tablet docked and undocked, but online reports suggest that the mechanism gets easier as it is broken in. You can certainly dangle the whole thing from the dock — it’s not going to slip out!

The lack of hard buttons on the touchpad is annoying. I keep resting my left hand where I expect the left click to be, and as a result, accidentally doing multitouch gestures on the pad. I bet I can turn that off though. Hmm. I did turn off tapping the pad in favor of actually pressing. There’s a satisfying click when you do it.

The screen is great.

I had to buy a mini-HDMI-to-VGA adapter, so I’ll be able to project. (Side note: how annoying is it that monitors now come with such a random assortment of possible plugs? Can we get back to standardizing please?)

16:9 is a stupid aspect ratio for a tablet. But all the Windows ones are this way.

…came the real issue. Getting it set up. For reference, I got this tablet four days ago. It’s still not really perfect, and almost all of it can be chalked up to Windows 8, which is frankly just not ready for prime time. But that’s a separate few thousand words. Look for that tomorrow, where I’ll cover

6 Responses to “Windows 8 tablet, part one”