Today was the fifteenth anniversary of the launch of Ultima Online. For those who would like to read up on some of the stuff I have written in the past, you can do so by clicking here. Warning: rambling ahead…

Here’s something that I think no one has ever seen. My wife and I were driving from Alabama (where we were in grad school) to Austin, to visit friends there — Sherry Menton and Rick Delashmit. All four of us worked together on LegendMUD.

Kristen and I had been talking about making another mud, one with deeper simulation elements. We talked about having abstract properties running behind things, instead of hard-coding every quest. How much cooler would it be, we thought, if the NPCs were simulated entities, rather than merely responding to player actions?

We took notes on a pad of paper, as we drove. We took turns, which is why the handwriting in these images changes: 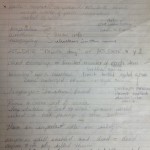 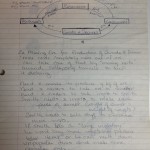 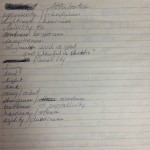 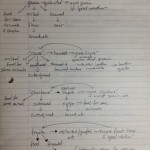 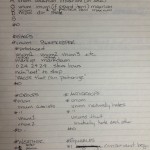 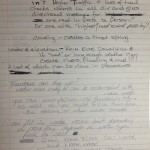 One of those pages has the old address of Ancient Anguish, a mud we were checking out. It’s still up. As you can see, a lot of the heavy lifting was done by my wife, the economist. 🙂 Some of this stuff ended up making it into LegendMUD — the weather stuff, for example. You also see there the notes on the genesis of the moods system that was first in Legend, then eventually in Star Wars Galaxies. It wasn’t until ’05 that I was able to do the water flowing downhill stuff, as part of an R&D project at SOE that was never used for anything. It worked, though.

Here was born the resource system. When we were asked to submit design samples, the resource system is what we sent in. It was more elaborated than this, much closer to what was eventually built for the game. Then they asked us to submit quest samples. They had sent us some sample code, to ask if we could read and understand it. We could… and we weren’t very impressed by it. I sent in the Beowulf quest from Legend as my sample…

An anecdote: We’re all meeting over the fact that we’re short on artists. It meant that we might lose the entire jungle biome.

I said to Starr, “If I can have a Wacom tablet, I can probably draw plants.”

Starr turned to Rick and said “Is he any good?”

I got a Wacom tablet. And I did all of these. They were all drawn from issues of National Geographic that I brought in from home… that’s why there are several specifically Hawaiian plants there. Later, poor Chuck Crist had to go through and painstakingly remove the black edging from them — I hadn’t done them on a transparent layer.

That was far from the only art stuff I did on UO.  All the design materials for UO went off to the lawyers when the lawsuit hit. It was a six foot tall stack of paper. I don’t actually think it ever came back. There was a printed out record of every patch. Design specs for everything. Detailed maps of every section of the world. For all I know, it is sitting in a legal file folder at EA somewhere… But I do have a few things from a sketchbook.

The embankments, as we called them, were an interesting challenge. We had experimented with doing height as pure optical illusion… I had worked up a faked set of terrain tiles which just had lighter and darker sides and were impassable, to suggest slopes. The whole thing made the ground look ziggurat-like. 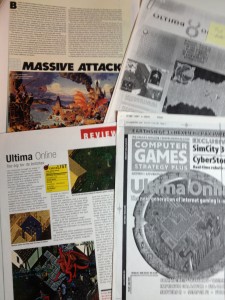 Then Rick Delashmit said he could probably actually give us texture-mapped terrain. But we needed a way to signal ravines and other slopes that were impassable… in particular, along the shorelines.

I used to actually draw isometric versions of structures, and even whole cities (I did for Serpent’s Hold) in order to plan out exactly where everything would go…

Eventually, of course, the game launched. And with it came a lot of press. I would be given faxed-in copies of articles from all over the world by the PR folks. Almost all of the reviews were middling to bad. 6 out of 10 was a pretty common score. (We did also get a pile of awards, including a couple for special achievement. We never got to see any of the trophies. They all went to EA HQ. I hear they are now all at Mythic). 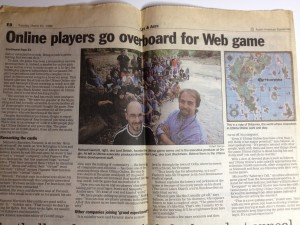 In one of these pics you can see the faxed-in cover of Computer Games magazine… I had been slaving for weeks over a very cool and much more elaborately built environment called Teratha. It was a spider-worshipping culture that built its city around a volcano. It became the cover image for the magazine article — and was cut from the game a little while later. I was devastated… but we had to make a lot of cuts… I mean, three whole continents were the first to go…! I remember sketching stuff out for the cultures of the Lands of the Dark Unknown — I think some of this eventually became stuff used in the Lost Lands and in Elikki and some other locales in Britannia. So if you ever wondered where these extra islands and whatnot came from… like Ocllo… well, now you know. 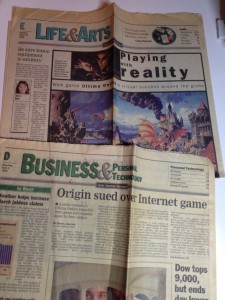 I also got a dozen or so emails and letters from fellow developers across the game industry — from Meridian 59, from Blizzard, from LucasArts and Bioware, full of praise. I printed them out and tacked them up on my office door. Marketing folks then asked me if they could use them in press materials and I told them no, they were never meant for the public. I still have those print-outs — and I am still not sharing them with you. 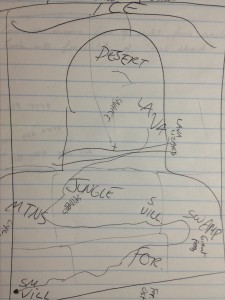 And then, of course, came the lawsuit.

The lawsuit was, as I recall, over the fact that the game was advertised as being available 24/7. But it was crashing, and therefore not always available. So a lawyer who went by the game handle “Bunboy” sued us. And his lead plaintiff, amazingly enough, was someone that I already knew: a LegendMUD player who had been a administrative challenge for years. In short, a problem player from one game had followed us to another game!

By then, Kristen was staying home with our second child. We had brought our first born, our daughter, into the offices with us. Every single person on the UO team had either quit, moved back to Ultima IX, or moved over to the already begun UO2. I was the only person left.

Origin asked us for an expansion. We had to use the empty space left on the edge of the map. All that would fit was a small chunk that I sketched out to mimic a portion of Ambrosia from Ultima III. We hired a few new folks — Chris Mayer (Faceless), Runesabre (Kirk Black)… I think it was a team of six, plus some of the folks who had quit working on contract, and we made The Second Age in three months.

The EA lawyers were very unhappy with me over a quote from that newspaper article in the pic. I ended by saying UO was “a grand experiment.”

They said “don’t you realize that’s the sort of thing they will use in court against us?”

But it was. Grand.

38 Responses to “Ultima Online is fifteen”