In the wake of what has been happening with SimCity 5, a lot of folks are asking what the future holds for single-player games that require an always-on connection.

It’s not going to stop.

The future is that

Basically, we will continue the march towards “everything you used to buy, you now rent as a service.” With all the good and bad that entails. 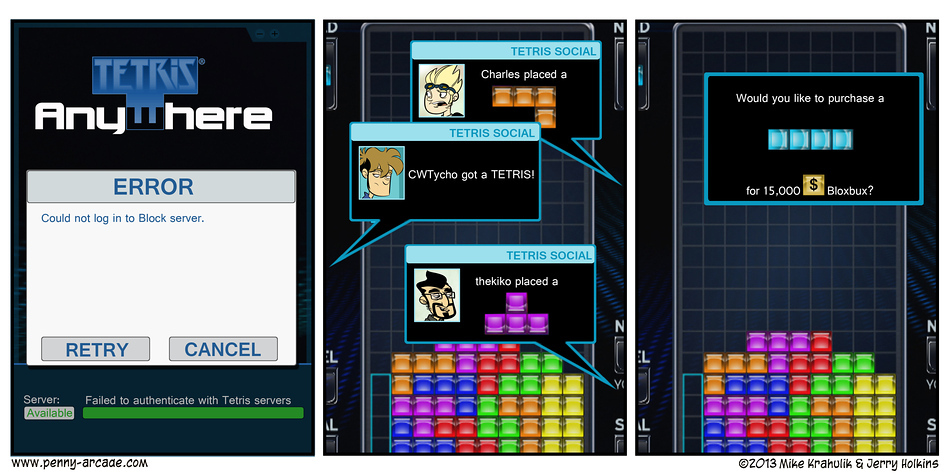 Don’t get me wrong, though. I keenly feel the drawbacks. As an example — as someone who cares deeply about the history of our medium, I shudder to think what happens to preservation efforts for games from this time period. We’re not going to be able to emulate things without reverse engineering dead server apps — which will mean reverse engineering every rule and bug.

Or another — we’re used to platforms obsolescing away the ability to play a given game. But when business realities mean shutting down a server as soon as the opportunity cost makes it not as profitable as doing something else, we’re going to feel like even single-player games have gotten to feel a lot like that TV show we loved that wasn’t allowed to finish out a full season and left us on a cliffhanger.

But for any business owner, the advantages greatly outweigh the disadvantages. Even with the issues SimCity has had, I am sure that right now the takeaway within EA is not “don’t do this” but “do it better.” The fact of the matter is that running a service seems to be one of those things that you have to learn by doing, stumbling along the way, and it’s a big adjustment for any organization that has been used to retail-style sales.

And the fact is that if it works seamlessly, customers will start to say “I like my Games On Demand” and sign up willingly.

It may be that at some point we see a swing back from the cloud — if the power on our devices exceeds that available in the cloud (if this happens, it likely will be due to bandwidth, not CPU cycles). But I don’t see that changing in the near future.

Instead, we’ll see disconnected games using their disconnected nature as a selling point, at first in contrast to the rocky services and later on as a premium offering for hardcore folks who want to keep going after the game is sunset.

Am I crazy about this scenario, all things considered? No. It has many pitfalls, and some old lessons are getting to be more relevant than ever. But at the same time… I design online games. I’ve been part of the problem the whole time. 😉

Best of luck to the SimCity team with resolving the issues. I’ve been there.

44 Responses to “Requiring online for single-player”