I was just pointed to this wonderful essay by Nassim Nicholas Taleb, author of The Black Swan and Fooled by Randomness.

First Quadrant: Simple binary decisions, in Mediocristan: Statistics does wonders. These situations are, unfortunately, more common in academia, laboratories, and games than real life—what I call the “ludic fallacy”. In other words, these are the situations in casinos, games, dice, and we tend to study them because we are successful in modeling them.

–Edge: THE FOURTH QUADRANT: A MAP OF THE LIMITS OF STATISTICS By Nassim Nicholas Taleb

It’s not the only ludic fallacy I can think of. Recently I had a discussion with a management and leadership consultant, and we were discussing the generational characteristics of Millenials versus Gen X in the workforce, and we were talking about how a gamer mentality may have affected the way Gen Y behaves in the workplace: more likely to follow the rules, more likely to work in teams, more needful of reassurance, less creative and risk-taking, less likely to see the full scope of irreversible consequences of a choice, and less likely to see things in shades of gray. In a way, these sound like thinking trained by games.

I’ve talked in the past about whether games are, because of their inherently mathematical nature, limited in conveying certain types of information. But I think it is also worth asking whether the scope of their models is effectively misleading, or even actively lying, about how the world works.

In Taleb’s books, the bogeyman is the extremely rare event with a high impact, which he calls a black swan. These are historically visible, but exist on timeframes long enough that we consider them arbitrarily rare: essentially, a non-event in our planning. Yet they also have a highly disproportionate effect on the environment in which they occur. In the article he offers this example:

There is a measure called Kurtosis that indicates departure from “Normality”. It is very, very unstable and marred with huge sampling error: 70-90% of the Kurtosis in Oil, SP500, Silver, UK interest rates, Nikkei, US deposit rates, sugar, and the dollar/yet currency rate come from 1 day in the past 40 years… This means that no sample will ever deliver the true variance.

A picture of Mission Valley, flooded in 1916 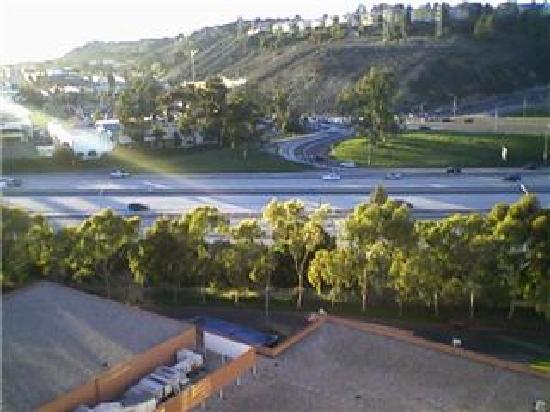 I am reminded of an article I read recently about the San Diego river, which is an “upside-down” underground river almost all of the time. It runs through a beautiful valley in San Diego — or would, except that there is no sign of water. But the Mission Valley area is still in a 100-year flood plain, and we silly humans built a mall there and a whole bunch of hotels. It’s on record that the flooding once reached the steps of the mission — which is on a hill above the valley (by Qualcomm Stadium). It’s been 92 years since that flood. Are we worried yet?

Humans have mental trouble with a lot of aspects of statistics. One of the commonest ones mentioned is that people tend to extrapolate linearly, not exponentially, so out gut instincts on rates of change are typically wrong.

Core to Taleb’s reasoning is the notion that we can live more safe and secure lives by being incredibly pessimistic and always planning for the absolute worst. By always making decisions based on the potential downside, rather than the potential upside, you end up with a far more conservative, but also more successful investment portfolio over the long run, whereas people who make decisions based on upside end up at a very high risk of losing everything in a dramatic day.

Graph of rising action in an audio play, by Yuri Rasovsky

Games have characteristic difficulty ramps that have little to do with real-world statistical distributions. For example, we are most familiar with linear curves, Gaussian and Poisson distributions, exponential curves, and the new modern classic, the punctuated curve. This last one is the difficulty curve of a typical game these days, which rises linearly or exponentially to a peak, then falls back somewhat, then rises again, in order to provide an extra challenge at a boss, followed by a breather. It is, of course, also the classic graph of tension in a novel or other form of dramatic writing.

What would a game with true black swans look like? It would throw something unpredictable and monstrous at you. Well, why couldn’t Tetris occasionally drop a monster block? Just one time in a thousand. Why couldn’t Fallout 3 occasionally deliver a randomly rolled instantly fatal death blow? Because it’s not fair!” “Because it would make the game less fun”? Perhaps, but the game might more accurately be reflecting reality, and thereby teaching better strategies.

In fact, we have seen this in action — in early Everquest, there were high level mobs that were aggressive and roamed the newbie areas. They slaughtered newbs who simply had no ability to fight back. Successful players during this period learned to be conservative in terms of how they moved around the zone. And it may be that the reason why multiplayer PvP games always come back up as an idea is their sheer unpredictability. Other humans are pretty good at providing black swan events, as UO demonstrated over and over again, and as EVE and Shadowbane continue to demonstrate today.

In light of today’s Pew report in which we learned that more adults game than don’t, it’s worth asking what other lessons games are teaching. Games have relatively finite palettes, because they exist on the basis of providing complete models — even if they are not NP-complete in the strict sense. They don’t tend to surprise, but rather reveal the expected, in many ways, because that is what signals to the player that they are mastering the problems presented.

I have mentioned before that one of the possible great strengths of games is that they can present complex problems as being amenable to analysis.

…games are by definition tractable. They teach you to chunk up, to chop apart, to disentangle. Perhaps this is where games can most change society: a way to look at the problems so that we no longer throw up our hands…

But when we look at that list from the top, about Millenial workplace attitudes, it’s hard not to draw the analogy to a generation raised in a system where there are always rules, always correct answers, where you geta pat on the head every time you do something right, and curves are always easily projected.

[Edit: it was pointed out that all this sounds like I am slamming Millenials; in fact, I did write a whole book about how good games are as teaching tools, so let me point out the clear benefits of gamist thinking as reflected in Millenials: team-oriented practices, clear goal orientations, high self-confidence, a firm belief that things are solvable, a lack of the cynicism and skepticism common to GenX… it’s not all bad!]

Rather than just bemoan this, I’ll instead issue the challenge: what is the fun game that features black swans, phase transitions, and the catastrophic 100-year flood? How do you sculpt a system that does this without chasing away the newbies?

Because it is they, above all, who need to know that their job and bank are far from being institutions — a lesson everyone is learning at a rapid pace these days; that yes, even something like the Fashion Valley Mall can end up underwater. That would be turning a feature of games against themselves, and making the medium — and our players — more robust.

38 Responses to “The ludic fallacy”