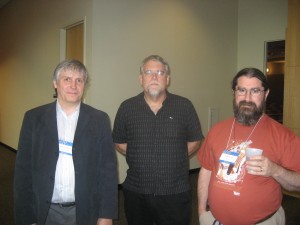 Far as we can determine, these three gentlemen have never been in the same real world place at the same time before.

Dr. Richard Bartle: co-creator of MUD, designer and theorist.
Randy Farmer: co-creator of Habitat, the first graphical world (as well as much more).
Pavel Curtis: the moving force behind LambdaMOO.

That is the three biggest inflection points in the history of virtual worlds, right there. 1978/9, 1985, 1990. If only we had John Taylor and Kelton Flinn here too.

I got pics with myself and with Brian Green in the mix too. Brian is on the pioneers panel with them in a few minutes. 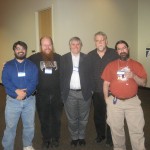 As above, but with me added to the mix