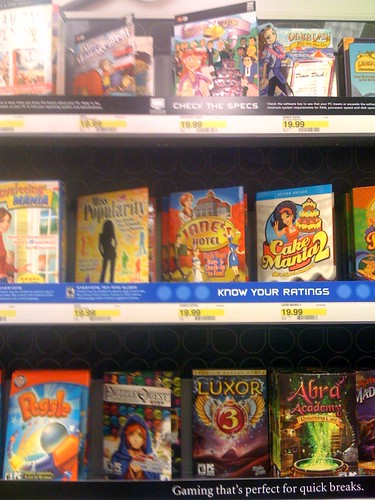 See now, what have I been saying? 🙂

Though when I point this out (as I did most recently in my criminally underreported, one of the best talks I have ever given, go watch the video now Sandbox/Web3d speech), I usually focus on adventure games, not the casual games.

The point is the same though — a misread of what the average consumer is purchasing. Target has plenty of data on this, they make their living from it. First fact: the PC rack is large, despite what anyone may say about PC gaming dying. And what they stock tilts pretty heavily towards game cards, adventure games, and casual games.

If you do venture into the “core games” shelves, by the way, what you find is that there are two shelves of Sims stuff, two shelves of Blizzard stuff, and a smattering of current popular titles.

6 Responses to “Another games picture from Target”