So today I finally got to play GemBlo, another game a lot like Blokus and its little cousin Blokus Trigon, which I have written about before. GemBlo is a Korean game, and it’s been backordered on FunAgain for ages. I ended up locating a copy from Boulder Games, but it appears they are out of stock as well. But I am glad I picked it up! Plus, it supports up to six players. Click past the break for a pic of the board and my thoughts. 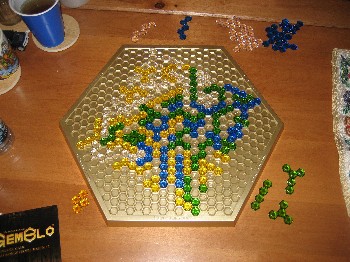 The end game of a two-player game of GemBlo.
In the two player version, each player takes two colors,
and you confine yourself to the four-player area, which
is a square defined within the larger board. The board
and pieces are quite nice; click the pic to see the close-up.

A post or so ago I mentioned that I keep a Word doc of single-sentence game ideas. One of the ones in there was “Hex Blokus.” That was it, nothing further. (And yeah, as you can see, ideas are cheap — everyone gets the same ones). Well, here it is, sort of. Not what I had pictured in my head, but nonetheless quite a lot of fun.

The game is somewhat pricey, but the pieces are very well made — sturdier than Blokus, and with a heftier board. There’s still just as much risk of losing the singleton pieces. There’s a nice velvet drawstring bag for keeping everything in, which works much better than the slippery “wells” that come in the Blokus set (especially since I store Blokus vertically! The pieces are forever slipping out).

The big catch, of course, is that instead of squares, as in Blokus, or triangles, as in Blokus Trigon, here you are using hexagons. The wrinkle on placement is that you don’t place pieces with just corners touching — instead, you have to place them using the equivalent — the apex of one hex. This means that there’s always a gap left between pieces as you set them down (if you click on the photo, you’ll see what I mean). Pieces of the same color are not allowed to touch in any way.

I’m not a fan of the white colored pieces, because they are somewhat hard to see. And at times, hunting around for a valid location to place your piece was problematic. But the fact that gaps of varying width maturally appear all over the place makes for a game with less sense of “walls” than the other two — instead, I was reminded somehow of plants, or plant roots, growing their tendrils into any open space. The often organically shaped pieces helped with this perspective.

Apparently, the designer of GemBlo didn’t know about Blokus when he designed this one. There’s a few examples of other divergences — the game comes with pics of some puzzle layouts that you can try to put together — basically, like solving hexagon-based colored tangrams. There’s apparently an expansion that adds a card game atop this, but I didn’t locate that.

I am looking forward to having a game party with all three of these games on the table at once. Shapemania! Now, what other simple polygons are left to make this game with? Perhaps one with arcs…