These all come from this interview. They sort of put paid to the notion that a mass market UGC business cannot thrive, I think!

For comparison, Zwinky reported 9.5m registered and 4.6m active back in September.

It keeps happening! The latest to jump into the fray is Meez, which is launching something called Meeznation.

This is on top of Gaia and Weeworld and Zwinky, of course… 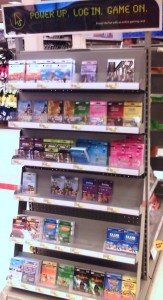 Nielsen is saying that Club Penguin is stalling out — not much, just a -7% growth year on year from last April to this April.

Of course, with the quantity of kids’ worlds coming into the market now, this is not really surprising, is it? I mean, I was at the grocery store this weekend, and there was a rack of Beanie Babies 2.0 with giant “play online!” tags hanging on them. It may be that this is the death of “Web 2.0,” when it gets co-opted for Beanie Babies.

At left here is the rack of game cards available at Target — snapped this weekend, and strongly reminiscent, finally, of similar shots I have taken in Korea, Japan, and China. For years, there was no such rack in the US. Then it was just a couple of cards, and only at some checkouts. Now it gets a rack right between the TV box sets and the top pop albums (you can see REM’s latest CD there, abandoned on the top shelf).

Besides the cards you maybe expect to see, like Club Penguin, WoW, and Zwinky, there’s also a large stack of ’em for gPotato games (Flyff, Shot Online, etc) And Acclaim, which make their living by bringing over games from Korea. There’s WildTangent cards, and the Gaia cards are almost sold out. The diversity is interesting, as is the lack of cards for most of the core gamer MMORPGs. The strong presence of the often-marginalized Korean games is telling.

Meanwhile, I hear that Age of Conan has something like 700,000 units in the pipe for day one, which is either a business blunder or a sign of high pre-orders and pent-up demand. WoW players looking for something new to sink their teeth into?

We’re starting to see the fragmentation that can come from having so many offerings on the market. How many kids’ worlds can actually survive?

I actually think the answer is “just about all of them.” If online continues to chew through the gaming market, this rack could be the size of a Gamestop someday — one stack of cards per game, in a world where all the games try to drive alternate revenue streams regardless of platform.