I love stories. My chief hobby is reading. I was formally trained as a writer, not as a game designer (there wasn’t really any formal training for game design I got started, but that’s another story). I think most game stories are not very good. And I quite enjoy games with narrative threads pulling me through them. When I find a game with a good story, I frequently prefer to the story to the actual game! So please keep that in mind as you read: I love story.

Narrative in a game is not a mechanic. It’s a form of a feedback.

This simple fact is frequently ignored, particularly in games aimed at the mass market. 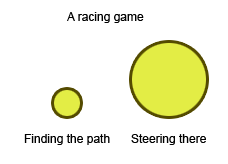 If you take something like a racing videogame, you now have a fairly hard interface problem; the sensitivity of the steering wheel or the analog stick is now an actual physical motor challenge — often a bigger challenge than the cognitive problem of where to point your car. Just turn on the “ideal path” feature that most racing games provide and you’ll see that the challenge in the game as a whole tends to come from the dynamics of the controls and the black box of the performance characteristics of the car you have chosen.

In a game grammar model, you always have a black box model, and you select something to input into the system. The system is going to give you feedback as to what effect resulted from your action. The game is in figuring out what the rules are for the black box. Not in a rigorous way, mind you — you tend to arrive instead at a mental model that gives you a heuristic as to how to approach the black box. Your learning is generally more intuitive — or even motor memory. It tends to function less at the logical level and more at the gestalt level (cf fluid versus crystallized intelligence).

The brain therefore tends to eventually dismiss whole classes of interface problems as trivial. “Click mouse” is one of these. “Mash button.” Any black box which gets a heuristic of “guaranteed result” is going to make for a non-game very quickly.

Ah, but the feedback for even a trivial action is very important. It matters that we hear the sound when we click the mouse. And should the designer choose, they can make the feedback be hugely disproportionate to the problem solved. Feedback serves the purpose of cueing the user whether or not they are being successful in figuring out the black box. So we provide feedback each time an input is made, and the feedback is intended to help guide the user as to whether they are doing the right thing.

It is easy to see that if you remove any one of these things, you end up without a functioning game.

That said, the brain happens to loooove feedback. It triggers reward mechanisms in the brain. It is remarkably easy to trick the brain into thinking that it has accomplished something when it really has not. This can result in the player getting hooked on the feedback for a black box system that is actually remarkably simple — or even designed to not teach the player anything at all, as in gambling. In design, we often terms designs “juicy” when they provide plenty of rich feedback, but we sometimes call them “exploitative” when they simply abuse feedback to keep someone going. 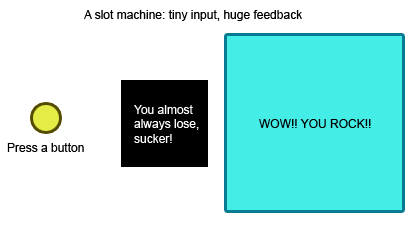 Games are a compound medium. They are made up of multiple other media, typically in the feedback. In other words, we rely on media such as film, writing, visual arts, music, and so on in order to provide the feedback. Games that do not rely on these other media much tend to get called “abstract” — a completely stripped bare game is actually a mathematical diagram or formula, not something easily seen or comprehended, so all games have to make use of other media at least a little. 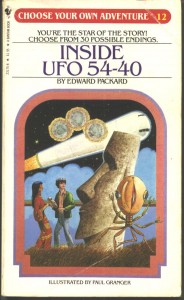 The commonest use of a completely parallel medium that does not actually interact with the game system is narrative.

If we take the simplest form of “narrative game,” the choose-your-own-adventure type of books, what we see is that the overall problem presented to the player, “get to a good ending,”  is fundamentally a decision tree, or directed graph in mathematical parlance. (Check out this link for a great giant diagram of one). So the initial problem is actually a decently substantial one — how do you get to a good ending, given that you have  no picture whatsoever of the graph as a whole or even of what lies “behind the choice of doors”? Every page flip is a Lady or the Tiger sort of scenario.

What ends up influencing your choices is the feedback. Your first feedback comes from choosing to play at all: the first pages. This is exactly the same as giving you the starting layout of the pieces on a chessboard. From then on, each time you make a choice, narrative is used as the feedback mechanism to tell you whether a given choice makes sense or not in terms of leading you to your ultimate goal.

A bad example of these books would give you positive feedback all the way until it dumped you into a lava pit or other horrible doom. A good example would ensure that there was a rising action and feedback arc for each of the possible paths, leading to both a learning experience and a good story.

Side note: my favorite of these was actually one where you were trapped in a spaceship with nasty aliens, Inside UFO 54-40. There was no path to the exit. You had to actually traverse the entire graph to realize this, and then when you got suspicious, identify the page that had no inbound link to it — which then boldly celebrated your cleverness. The player’s lesson learned is therefore quite profound: sometimes situations are set up not to be winnable, don’t blindly obey the rules, and you should engage in lateral thinking when your survival is at stake.

Now I will pick on one of my absolute favorite games of the last year, Batman: Arkham City. There is a moment quite close to the beginning that has you climbing up a tower (spatial navigation puzzle with interface problems as well) only to reach the top of a cathedral where you are interrupted by a narrative moment: a video of the Joker playing on a television set, explaining that he has planted a bomb and you are about to die.

AFter this long bit of rich narrative, you are presented with a very very small game. You have to rotate your camera to point at a window, and press the A button. If you do not do it within the time allotted, you die. If you succeed, you are treated to a gorgeous cinematic moment of leaping through shards of shattering glass and spreading your cape to a rigid wing, as you float away from a savagely exploding edifice in the midst of the brooding panorama view of Gotham.

This is a very common pattern in videogames these days. It even has a name: the quick time event. The black box is miniscule and simplistic. If we were to reduce the feedback, this “game system” would strike us as stupid. And it was stupidly simple in God of War, it was stupidly simple in Uncharted, etc. (Please note, I am naming some of my favorite games, made by colleagues and friends! Fortunately they, and Arkham City, offer plenty of rich systemic gameplay in between the movie bits. 🙂 ) It is almost, but not quite, as stupidly simple as the page flip in a Choose Your Own Adventure book.

In fact, there was a quasi-parody series of games that basically took these sorts of super-simple game systems, and packaged them up with ridiculous feedback wrappers. It was called WarioWare. It derived all of its black box challenge from two factors: speed, and determining what the hell the confusing feedback meant. (The fun in the game was figuring out what stupidly simple action you were supposed to take).

There’s nothing wrong, to my mind, with using narrative as feedback. But we have to keep in mind that all that narrative and visual content is the expensive part of making the game. It is also consumable, whereas a systemically driven game system can provide many many problems to solve and heuristics to develop (and therefore fun to be had), with relatively few rules. Because of this, narrative content is destined to be expensive, short, and over.

You’re not going to get people to keep playing unless you keep releasing more content. This will matter quite a lot for any service-based game, be it MMO, F2P, social game, whatever.

I also feel fairly comfortable in labelling a game with that sort of structure as “a bad game design” even if it may be a great game experience. The bar that designers should strike for should include a rich set of systemic problems precisely because that is what the medium of games brings to the table. It’s what lies at the center of the art form.

If the systems of your game are outweighed by the feedback, you should grow suspicious. And if they are outweighed by feedback that takes the form of movies, you’re making interactive movies first and games second.

126 Responses to “Narrative is not a game mechanic”