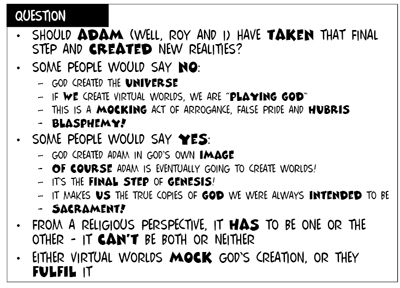 Dr Bartle has uploaded slides from a recent talk that is for “those who wish to see a definition of hubris incarnate” as he puts it: a disquisition on how creating virtual realities opens up religious questions. It’s quite interesting.

The basic premise is that realities are realities — just because one is a relatively crude construct doesn’t mean it isn’t a full-blown reality. Therefore, those who create said realities are gods.

By the time it gets to creating AIs that are self-aware but not knowing whether they are creations, we’re into fairly familiar territory. But it goes beyond that into the notion that perhaps you could create afterlives for these AIs, or allow them to visit your plane of reality using “waldoes” of a sort — a notion that resonates with Ted Chiang’s wonderful novella “The Lifecycle of Software Objects.”