Dan Terdiman at CNet engages in some handwringing over the fact that kids worlds and social games are taking over the hype that used to belong to virtual worlds.

But to someone who cut his virtual world teeth on more immersive, 3D environments like There and Second Life, these never-ending announcements of new companies trying to jump on the social gaming bandwagon have left me with one nagging question: Where is the innovation?

The innovation lies in making something that matters to ordinary people.

Now, I am a virtual world person, obviously. I don’t see much distinction between the game worlds and the non-game ones like Second Life. I have been working with them since the text muds, for over 15 years, which doesn’t exactly put me in the true old dino category where Richard Bartle and Randy Farmer reside, but I think it is fair to say that I have been closely identified with the space for a long long time now.

And I think that they aren’t over, but the form that they have taken is.

Most of the classic definitions of virtual worlds have centered around the following: 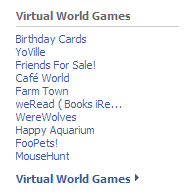 In addition to these, a cluster of common features, some from games but not all, have come to be tightly associated with the medium — more as praxis than because they are intrinsic to the form. Examples include: 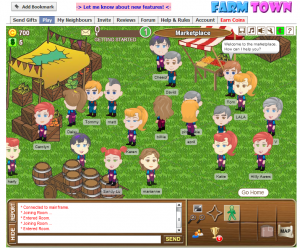 It’s hard to think of virtual worlds where these elements are not included to some degree. And yet, and yet, the commonest mental model of a virtual world is probably still best articulated as “a non-real place that exists independent of my imagination.” The common element here is that Second Life, Star Trek Online, whatever — they are there even when I am not, thanks to the computer simulation. Whereas countless other imaginary worlds, both simulated and not, do not have that sense of independent existence — worlds ranging from a detailed simulation as in Half-Life 2, or even a local Renaissance Faire, do not provide that sense.

There’s a reason why Facebook labels games like Farmville, which are completely lacking in synchronous avatar-based interaction, as “virtual world games” on their games directory page. Farmville meets this test via the same manner that something like Animal Crossing did — it doesn’t run a continuous real-time simulation, but it sure feels like it does to a user. And both Farmville and Animal Crossing feel like they are worlds with independent existence.

In fact, many of the competitors to Farmville do in fact offer avatars and “massively multiplayer” spaces. YoVille is the most obvious example of a true virtual world on Facebook, but there are others, including some in the farming genre such as Farm Town, which offers a true massively multiplayer marketplace area where users can go to chat. (Except they don’t chat… more on that later.)

But it’s clearly not the majority. Yet.

A lot of the praxis around virtual worlds — and indeed, games in general — has been co-opted by social media. Enough, in fact, that we are starting to see worry that too much has been co-opted.And I can’t really complain, since I have done my share of evangelizing this stuff to web people!

But just as telling are the parts of the praxis that are left out. Let’s take a look at some of these practices and what has happened to them:

Pseudonymity is taking a lot of hits lately. Not only does Facebook insist on real identities, but we have seen Second Life moving to having real life profile data alongside the pseudonym — in the new viewer, your profile shows both of them, right next to each other. And today, Twitter (still pseudonymous) started rolling out discovery via real identity as well:

Today, Twitter took the wraps off a new feature of the site. When logging in, it prompts the user to set defaults on being discovered with their email address or mobile phone number. It’s called “Be Found on Twitter”. Our contact at Twitter told us that, like many new features, this will show up for some users today and others soon.

— ReadWriteWeb, “Be Found on Twitter: Connecting Our Dots in the Social Graph”

The pressure is towards real life identities instead. In fact, towards singular identities. Speaking as someone who consciously ditched pseudonymous handles a few years ago, this was inevitable once you had a sufficiently connected set of databases. And really, the strong ties implicit in virtual worlds have been always been pushing towards real life ties — it’s even in the Laws, so it’s a phenomenon recognized for over a decade now.

I just got done writing the other day about how placeness is a feature and not the point. Given that placeness is the chief characteristic of virtual worlds, this is a bit of a blow to the traditional conception of virtual worlds as a destination. One characteristic of a social-game-as-virtual-world (or indeed, non-placey things that people like labelling as “virtual-world-like” that really aren’t worlds at all, such as Twitter, and so on) is that they are not destinations in their own right; they are been seen as adjuncts to other activities.

The part of formalized user roles that is best described as the class system is outright gone. Classes are essentially a game system oriented around forcing people into strong-tie teams for synchronous activity. They are the same game mechanic as having a quarterback, a linebacker, and a kicker, or players on offense and defense. They are about complementarity.

But the social web has evolved into more of a classless system, in the end, perhaps because teams with rigid roles have always been a very artificial construct. It may be that the social games will start to include this sort of mechanic, but… I am unsure they will, given that…

Weak ties have supplanted strong ties as the default social link. Asynchronicity rules the roost, not real-time interaction. Real-time is a feature, a perk, something used occasionally. It’s not the norm.

It is hard to overstate how big a deal this is.

So what’s left for virtual worlds? Two of the three key elements in the definition have fallen out of favor in a lot of ways, and the common practices around the last one have been co-opted in radically different forms.

The principal places where virtual worlds offer benefits over these flatter means of participation will have to do with preserving spaces where these qualities can still occur. Applications where

The most obvious answer is games.

Any application where you can “pick two” will likely migrate away from virtual worlds, because the presence of the third is a barrier, not a benefit.

Roleplaying forums on sites like Gaia and Deviant Art are doing well because the barriers implicit in heavy representations of placeness are absent.

Something like Second Life struggles to gain mainstream adoption because flatter pseudo-places can offer so much of what it does, and the very real benefits it offers are only benefits to a segment of the audience that wants either the pseudonymity, or the placeness, or the chat.

And Facebook games? Hey, there’s a place that feels like a world, strongly weak-tie driven, without pseudonymity issues, and yet they carry with them all that praxis, all that other stuff that was elaborations on the core virtual world concept. It’s like a virtual world, “with the bad bits removed” — which is of course a phrase we have heard before, when discussing why World of Warcraft does so much better than the other MMORPGs.

Instead, I think we will see the co-option process continue. These flatter environments will learn to use pseudonymity as a feature, and synchronicity and strong ties as a feature, and placeness as a feature. Then they will fall perfectly into the technical definition of “a virtual world.” But when we connect to them, we’ll have trouble recognizing it, because they won’t be the defining features.

They will be add-ons to the core experience — which will be worldy in the imaginary sense, not the simulation sense. Arguably, worldy in the real sense, because by then, these “connected society applications” will partake deeply of the real world.

TL;DR. Short form: virtual worlds are dead, long live the world, virtual. And it isn’t the picture that we painted for ourselves, as we thought about the way in which virtual worlds would evolve, all those dreams of richer simulations and NPCs that talk to you, of simulated societies and of immersive experiences.

But it doesn’t mean virtual worlds are over. They are metamorphosing, and like a caterpillar, on the path to mass market acceptance, they are shedding the excess legs and creepy worm-like looks in favor of something that doesn’t much resemble what it sprang from, but which a lot more people will like. And which will be a bit harder to pin down.

It may not be the last change. It may be that the prevailing currents away from these things change — it happened now, it will happen again. It may be that as tech barriers fall, placeness becomes easy; or that the privacy pendulum swings back the other way and pseudonymity comes back to the Internet.

In the meantime, I would be betting against all the “native client” worlds — AAA game worlds included. Against anything that involves too much of a fantasy identity. Against anything that relies on people playing together in real time. It’s just not where the action is for the next several years. Virtual places as they exist now cannot be a mass medium any more than a single restaurant can.

For those of us who dream of a place we can’t possibly be, doing things we couldn’t do, as someone else, with friends… well, we’re a little bit out of luck. We’ll always have our Avalons and our Lost Worlds. They’re just not the future anymore.

88 Responses to “Are virtual worlds over?”