Mint.com is a personal finance site that won the judges’ award at TechCrunch40 the same year that Metaplace won the audience award. It helps you do budgeting and other such dull tasks, all in slick interface.

Despite the zillions of products out there to do this, we still managed to wheel, deal, and borrow ourselves into a financial crisis (that is still ongoing, though swine flu may be eclipsing it just now). Clearly, something was lacking in the appeal here, for if said product category were truly successful, we wouldn’t be in this fix.

Now, Mint is in closed beta on a feature that turns personal finance into a game, complete with points earned for doing things like socking away some cash into the savings account each month, or switching to a credit card with annual rewards. Get enough points in a sustained way, and you too can be a Financial Guru.

This seems like a fairly straightforward harnessing of game-style incentive systems towards a laudable goal (though I should note that said credit card with rewards is likely from one of Mint’s partners). But honestly — money is points anyway, isn’t it? Why is it that we value the cash less than the flat-screen TV?

There’s probably piles of psychological and economic literature on the subject. For example, it has often been commented that we are more willing to spend credit than cash, because it seems “less real.” For that matter, humans shop for comfort — sadness spurs spending, because it makes us happy to acquire things, and happy to buy things for others.

Of course, as all good readers of A Theory of Fun for Game Design know, anytime we see “makes us happy” we should be slightly suspicious, because it means “gives us a jolt of drugs.”

Not very long ago I made a very small Easter Egg hunt game for Metaplace Central. The rules were simple: 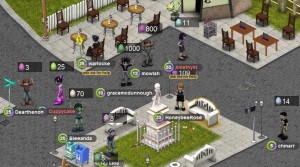 Now, there’s no reward in this game, there’s no winner or loser, and there’s no endgame. Yet even during testing, I had to tear myself away, and when put into Metaplace Central, average session length for the day went up 50%. But… in some sense, it’s a crummy game. Why this effect? Because the Easter Egg hunt is a confluence of a lot of highly manipulative tricks.

In short, the Easter Egg hunt, crude as it was, had plenty of opportunity to insert a lot of deeply manipulative game mechanic tactics that create addiction, attention, and loyalty. Now, eventually, it did wear thin — as a pure accumulation minigame, there was not a lot of depth to it, and the choices users could make quckly palled. But at its core, what we had here was the basic acquisition mechanic of an RPG, in its bare bones form.

In Ultima Online, people preferred to hoard shirts than hoard gold. This is also the basic acquisitive mechanic at work. People like “stuff” more than they like money. Money is merely “potential stuff” because it has still left a choice open. Final rewards in games are things that you cannot make choices about.

In this sense, financial management websites tend to fail because it’s sort of like doing financial management on those tickets you get at carnivals or Dave & Buster’s. They’re signifiers of a future reward, not the reward itself. Similarly, non-tangible cash in bank accounts reported merely via a number may in fact seem less real than the points on Mint’s game system dashboard! After all, you can’t spend the points.

If those Easter eggs were something you spent, the game would have lost a lot of its addictiveness, unless you spent them on something else that you got to keep. Preferably, something you can choose from a broad array of goods at different values, so that you get a rich choice that keeps you dithering; because the natural follow-on the moment after purchase, by the way, is dissatisfaction. The dissatisfaction is displaced onto you if it was your choice; if Dave & Buster’s picked the item for you, you would be mad at them instead.

It may be that one reason why we used to be thriftier is simply because the money we hoarded was more tangible… gold coins trigger the brain’s systems in a way that a bank balance does not. This is what the Mint point system is designed to supplement: by creating a non-fungible point system, the game is giving you something other than real-world stuff onto which to displace your acquisitiveness, a “virtual stuff.” It would do even better, perhaps, if the points were gems or something else more “stuff-like” in terms of its representation.

Of course, unless there is social validation, then even that stuff may not mean much. Recently, there have been a few news articles about the practice of pushing energy and water conservation by displaying your neighbors’ consumption rates to you. The social pressure pushes you to use less. Similarly, when your neighbors model conspicuous consumption, we model that as well — it’s called “keeping up with the Joneses.” Providing Mint users a public comparison table so that users could compete on points and show off their frugality would reinforce the system quite dramatically, just as the highly visible egg counter did.

This is why in WoW it’s all about wearing that full set of (honestly, kind of pointless) armor: it’s a status symbol, the way that jewelry is. (Jewelry, by the way, is an industry that has mastered much of the above!)

PS, to address the recent controversy, this was a game design blog post. 😉

16 Responses to “Why Isn’t Money Points?”